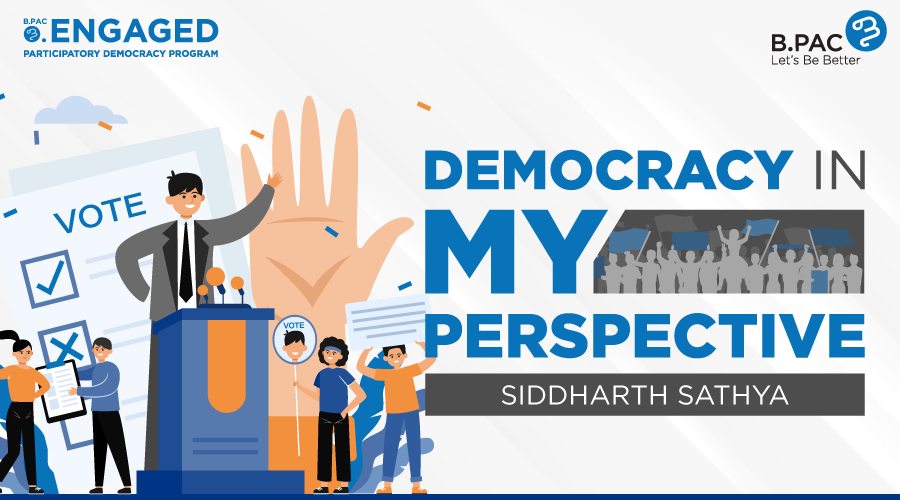 Democracy, the great experiment of the west. Not a perfect system, but the next best thing.Â For any functioning democracy, the four pillars that hold it up must gleam in the light of this new dawn.Â They must propel our vision of democracy into theÂ heavenly skiesÂ andÂ out of reach of theÂ knifing humans that seek to bring it down.Â But what is our vision of democracy? Is it simply another perhaps more logicalÂ system of governance?Â Is it a ray of hopeÂ for those who seekÂ to hold their representatives accountable? Or is it a chance to take control of your own destiny, to have a voice and a say in how your country isÂ governed?Â The truth is, itâ€™s all of them.Â Â

Democracy from the perspective of a student, a minor is a responsibility. A responsibility that every citizen must undertake. No matter who you are, no matter which caste, religion, or sex you are, democracy will fail if you choose to step away, if you decide not to vote, if you fail to undertake what one could argue is your obligation. Democracy works on the foundation of the proactive participation of every citizen. A leader elected in a voter turnout of 40%Â or 45% is not a representative of his/her country or state constituency.Â Â

Democracy is the champion of freedoms, liberties, and basic rights. That is what one expects from any democracy. A democratic country that fails to give its citizens these civil rights is simply using the ideology and perception of democracy as a faÃ§ade merely to serve their own interests. Hence, it is vital to differentiate between a functioning democracy and a democracy that simply uses the ideals of democracy to portray itself as a twenty-first-century country. A government that restricts its press deprives its citizens of basic and civil rights, and sticks its fingers in the judicial pie is not a true democracy.Â

The four pillars of democracy must each stand equally tall, and work in tandem. The overpowering powers of parliament mustn’t dictate the rulings of the judiciary, the press should refrain fromÂ indulging in political biases and must report only the factsÂ andÂ the president must not use his executive power to overrule the elected representatives in parliament.

â€œFor the people, by the people, of the people”Â are the most important words in any democracy. In a democratic country, one has to sit back and ask; Does our democracy truly encompass these ideals? Is it truly for the people?Â  Do the policies reflect what the people want? Are politicians and policymakers connected to the general population and what they want? Do the laws created serve every citizen equally? These are the fundamental ideals that democracy is built on, and any functioning democracy must have these principles.Â

The survival of western civilization, twenty-first-century values, globalization, and basic and civil human rights all depend on democracy. For the sake of progress, countries must come to embrace Democracy. Democracy is also essential in keeping the peace for it prevents hot-headed authoritarian leaders from dragging their countries into war and hence the survival of humanity itself is dependent on the survival of democracy. This is what I think democracy represents.Â Â

About the Author: Siddharth Sathya