Vidhana Soudha – The Pride of Karnataka 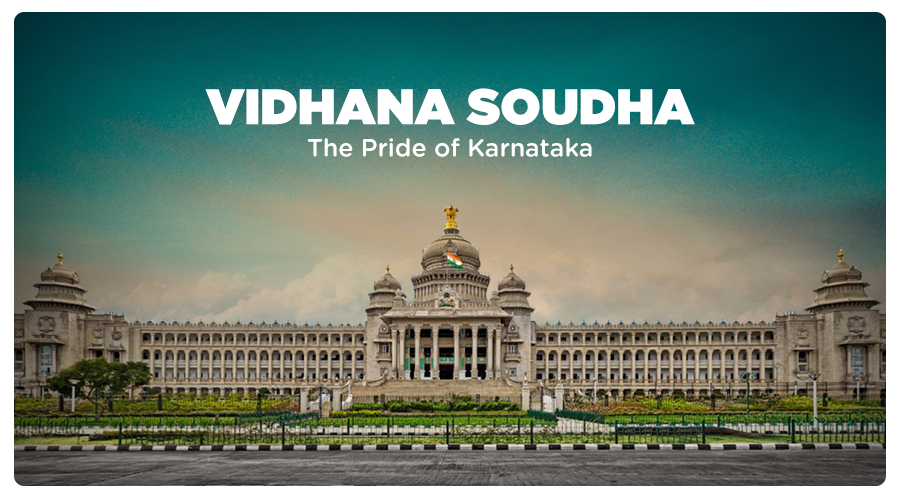 Vidhana Soudha – The Pride of Karnataka

“Beauty perishes in life, but is immortal in art” – Leonardo da Vinci

Karnataka is home to architecture that personifies elegance and a lot of history. From beautiful forts and temples to palaces that exude luxury, Karnataka has it all.

The History of Vidhana Soudha:

The post-independence era in India ushered in many ideas and thoughts. Back then, the administrative offices in Bangalore were based out of the High Court building built by the British in 1868. The idea to have a structure to house the legislature was mooted during the tenure of Karnataka’s first chief minister, Kyasamballi Chengalaraya Reddy. The idea turned into action during the term of Kengal Hanumanthaiah, the second chief minister of Karnataka. 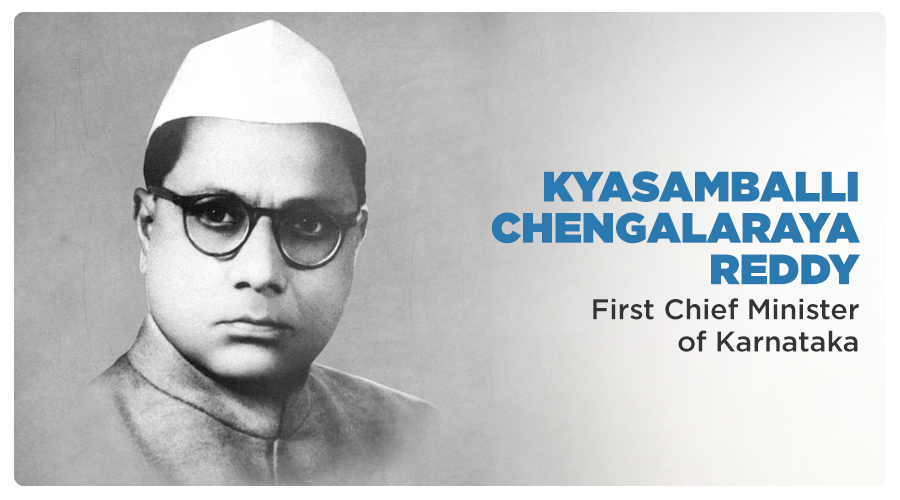 The story around the architecture of Vidhana Soudha goes back to the time when a Russian cultural delegation was visiting Bengaluru. Challenged and inspired by their comments, Kengal Hanumanthaiah vowed to create a grand monument that would showcase Karnataka’s indigenous architectural style. His vow resulted in a timeless structure of grandeur. The construction of Vidhana Soudha was assisted by the then government architect and chief engineer, B.R. Manickam.

The Idea behind Vidhana Soudha’s Design:

Built between 1951 – 1956, with an idea to symbolize the legislative sovereignty of the people, Vidhana Soudha is inspired by the likes of The Capitol, in Washington D.C., and The House of Commons, in London.

To ensure a contemporary feel to the structure, Kengal Hanumanthaiah visited numerous places in the world, in Europe, Russia and the United States. The foundation stone for this imposing edifice was laid by Pandit Jawaharlal Nehru, the first Prime Minister of independent India, on 13 July 1951.

The architecture of Vidhana Soudha is inspired by Tanjore’s Brihadeshwara and Karnataka’s Somnathpur temples. Vidhana Soudha boasts of Mysuru Neo-Dravidian architecture, with influences from classic European and Indo-Saracenic styles. It has incorporated various elements from the medieval kingdoms of the Chalukyas, Hoysalas and the Vijayanagar empire.

The entrance to Vidhana Soudha, containing the carving of a four-headed lion, comprises a flight of forty-five steps which are 204-feet wide and 70-feet deep. The stairs lead to the foyer on the first floor, which further connects to the Assembly Chamber. The Dravidian-style architecture consists of richly carved bases and capitals for pillars, arches and cornices.

Constructed entirely with ‘Bangalore granite’ and porphyry materials, Vidhana Soudha has ornamented domes on all four corners. ‘Magadi pink’ and ‘Turuvekere black’ stones have also been used to add to a visual effect. The structure also consists of modern designs which make use of materials like steel, cement and glass.

Thousands of people worked relentlessly to ensure that the building was constructed in four years (i.e., 1956). Most of the unskilled labourers employed to build the structure were convicts who were given freedom once the construction was completed. Vidhana Soudha’s construction employed 1500 chisellers, masons and wood-carvers.

The overall expenditure to construct this three-floored stone structure was Rs 1.84 crores.

The Legislative Council Chamber, located on the southern wing’s first floor, measures 100-feet and is 75-feet high. It can seat 88 members.

The cabinet room in the building has a door made of pure sandalwood with intricate carvings. Vidhana Soudha has more than 300 small and big rooms inside, accommodating more than 20 departments of the state government. Vidhana Soudha and its surroundings occupy a sprawling 60 acres. 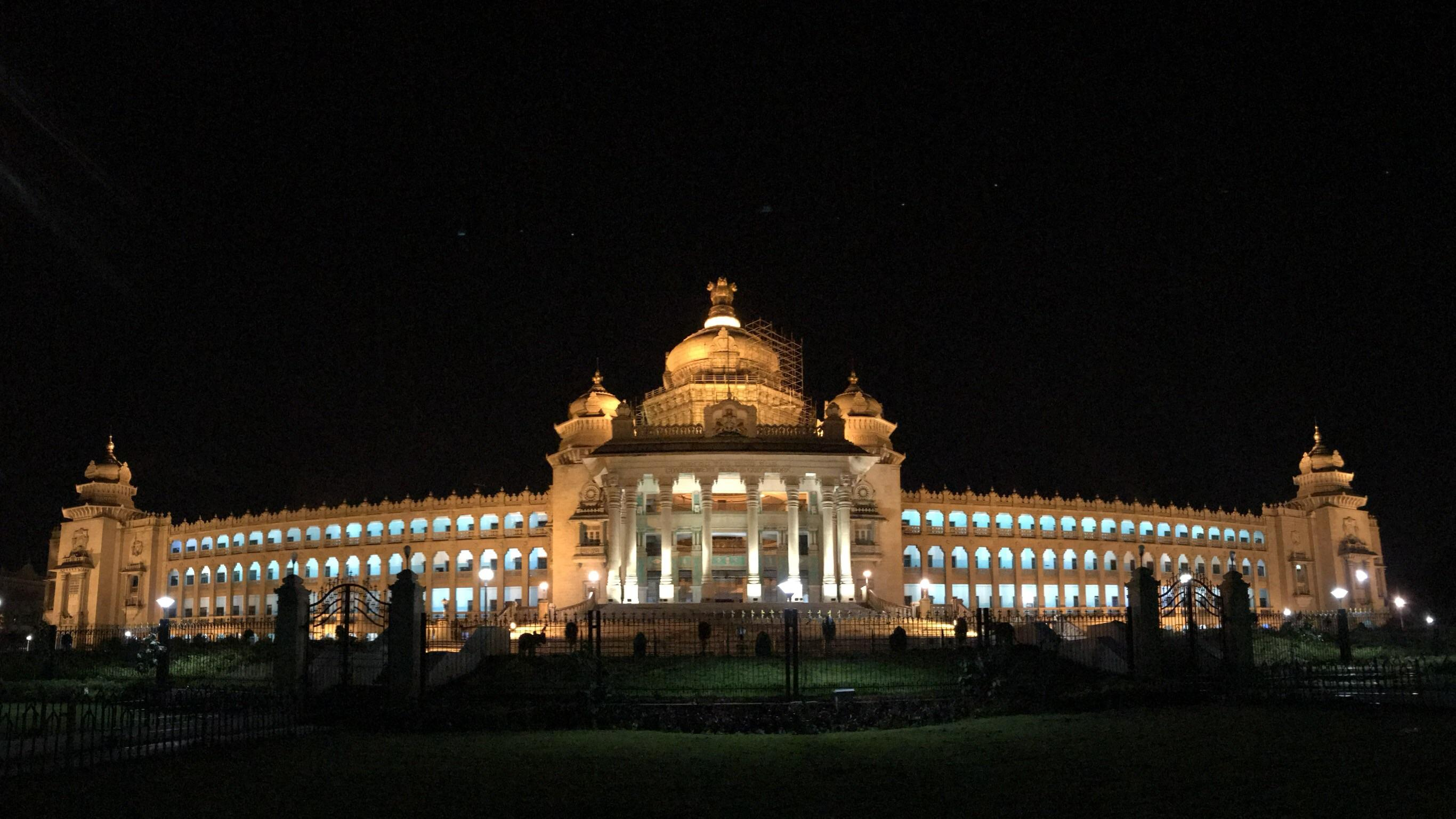 Vidhana Soudha at night, in all its beauty and glory!

In the book ‘Concise History of Modern Architecture in India’, author Jon Lang describes Vidhana Soudha as an “exemplar of a revivalist building of the era”.

Today, Vidhana Soudha boasts of being the largest legislative building in India. Apart from being a centre for state politics, Vidhana Soudha has also hosted the likes of Queen Elizabeth II and other international leaders who gathered for the SAARC Summit in 1986.

Currently, the Vidhana Soudha houses the State Legislature and the Secretariat of Karnataka. 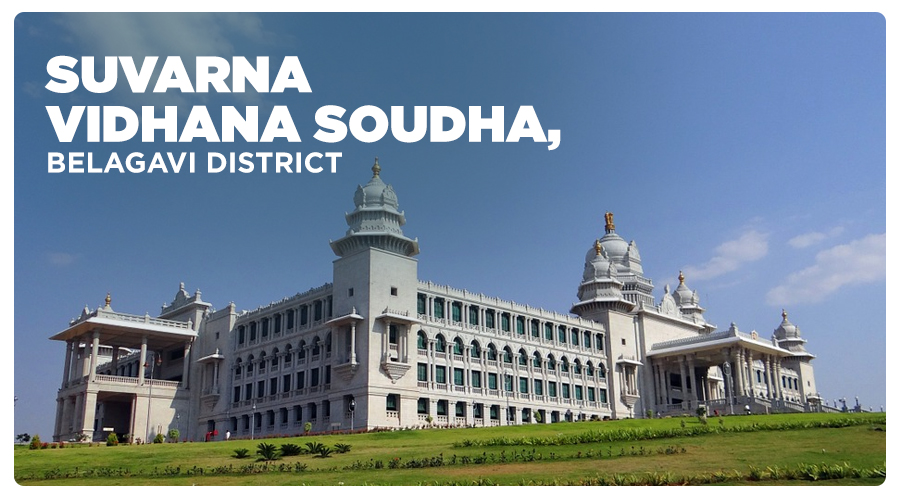 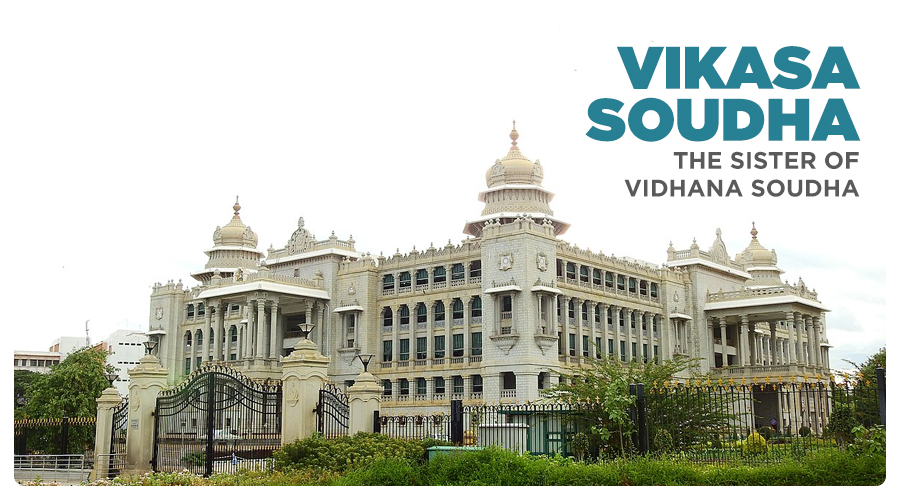 Located on the southern side of the Vidhana Soudha is a structure called ‘Vikasa Soudha’. This is popularly known as the Sister of Vidhana Soudha. It was initiated by the then chief minister, S. M. Krishna. Vikasa Soudha was built by the Karnataka State Government. The construction was initiated in 2001 and the building was inaugurated in 2005. It was built to bring all the important government offices under a single umbrella and to cater to the space demands at Vidhana Soudha.

The architecture of Vikasa Soudha follows the Neo-Dravidian style of Vidhana Soudha and was built using granite from Hesaraghatta, Mallasandra, Avalahalli and Koira. Vikasa Soudha is built over an area of 8 acres and comprises eight floors, fifteen conference halls, 360 rooms and a three-level basement system sufficient to accommodate 600 cars. The main hall of Vikasa Soudha has an alluring and colourful map of the state of Karnataka.

Besides its architecture and striking resemblance to the Vidhana Soudha, Vikasa Soudha is also known for being the first government building to contain a hydro-pneumatic water supply system and a solar power grid system. This magnificent structure has also implemented rainwater harvesting.

While Vikasa Soudha incorporates some of the most modern facilities not seen in any of the other legislative buildings across the country, Vidhana Soudha stands as an inspirational icon in Bengaluru, drawing people for its history and architecture.

This World Architecture Day, experience timeless beauty with a visit to Vidhana Soudha!