Need for a healthier Political and Public Discourse 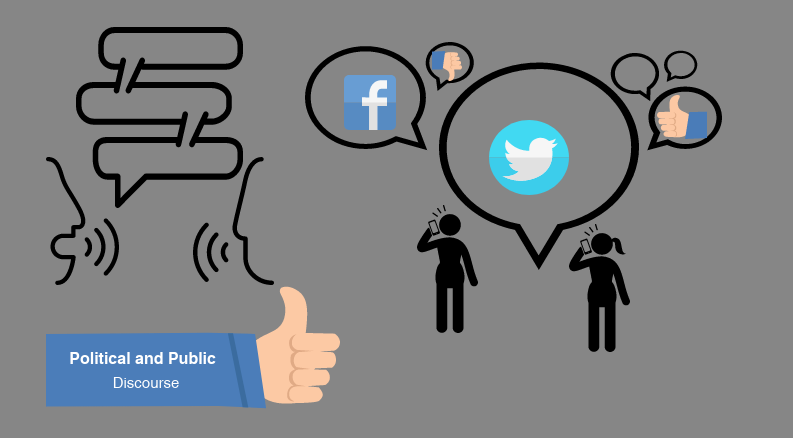 “A government of, by, and for the people requires that people talk to people, that we can agree to disagree but do so in civility. If we let the politicians and those who report dictate our discourse, then our course will be dictated.” – Donna Brazile

The quality of political and public discourse is deteriorating in our society. Of late, frequent instances of uncivilized name-calling and use of abusive language has taken over decent public discourse. This trend gets especially worse during the time of elections. Over time, we tend to accept this continuous lowering of quality as the norm; the result of our failure to put pressure on the politicians to observe minimum standards of probity in public life.

It is dangerous as often language shapes culture; and the violence implicit in an abusive language would not take much time to surface in physical action, thus disturbing the balance and peace in public life. We have to ensure that this nature of discourse doesn’t get normalized, in a downward spiral. With the advent of the social media message dissemination, the need to provide the clickbait news and making news viral should not take over the norms of decent conversations. The number of issues that get blown out of proportions affects us as the political parties use these outrages as distractions from real issues.

Famous Public Policy expert, Joseph Overton, explains this movement of public discourse through his model named Overton’s Window. Also called the Window of Discourse, it includes a range of policies considered politically acceptable in the current climate of public opinion, which a politician can recommend without being considered too extreme to gain or keep public office. An idea that falls outside this window is not politically viable, irrespective of the person’s preferences. The Overton window is an approach to identifying which ideas define the domain of acceptability within a democracy’s possible governmental policies. Proponents of policies outside the window seek to persuade or educate the public to move and/or expand the window. Proponents of current policies, or similar ones, within the window, attempt to convince people that policies outside it should be deemed unacceptable.

All the discussions/ideas that fall inside the Overton window is normal and expected, while everything outside the window is radical or unthinkable/unimaginable. What we see today, is an effort to expand the window towards less desirable policies through discourse and amplified by, both conventional and social media. This process, over a period, gets fringe ideas not acceptable in today’s environment, into the window of acceptance.

In the context of India and the Karnataka State, in particular, this window of discourse is being pushed to normalize the disruptions of the Houses of Legislature. Upper & Lower Houses of the Parliament and State Assemblies are mandated to meet every three months, while the Municipal Corporation, with Bangalore in context, BBMP council meetings happen every month for two days. It is the responsibility of elected representatives to debate and deliberate on the legislation and issues that affect people, but disruptions allow little time for debates. The loss of time, just below 10% during the 10th Lok Sabha (1991-1996), reached a record high of 40% during the 15th Lok Sabha (2009-2014)and seemed to be going down further in the current term of the Parliament.  The reduction in the time spent on legislative and people issues have come down both due to the shortening of duration and the disruptions in the conduct of the Houses. This reflects the continuous degradation of citizen engagement with their elected representatives and the indifference by them to be accountable to the taxpayers’ interests.

As citizens, we should ensure that such disruptions are not used as tools to duck out of the responsibilities of both the ruling parties and the opposition. This will adversely affect all of us in the long term and divert the Country’s efforts and energy from the critical issues we face on a daily basis.

The time now is right for us to realize this and understand and be more aware of seeing the difference between ideological battles and actual development/ governance-related issues. The situation is a direct outcome of the expansion of the window of public policy by the elected representatives of all hues, to come to include issues away from development/governance. Repeated adjournments & canceling of meetings and not transacting business, affect the necessary deliberations & decision making with long-term consequences.

Towards achieving this, we, the citizens, should:

1. Publicly denounce any efforts by the political parties to take the public discourse away from development and constitutional provisions. This will give a message that unwanted expansion is unacceptable to the people.

2. Write to the respective elected representatives to use better language and not bring down the quality of public discourse.

3. We should make periodic representations to the elected representatives to ensure that the House conducts for the business of governance and development.

5. Pressurize political parties to regularly publish the performance of the elected representatives and define a threshold of attendance/participation for seeking reelection.

6. Create noise through public meetings/social media etc. whenever we sense that the quality of discourse is going beyond what is currently acceptable.

Like Toni Morrison, an American novelist, professor emeritus at Princeton University says “Our debates, for the most part, are examples unworthy of a playground: name-calling, verbal slaps, gossip, giggles, all while the swings and slides of governance remain empty.”

We must use all of the channels available to us to ensure the people we elect are the voices we need at the forums they are elected. We need to pledge to engage in the various levels of democracy to ensure we can be heard. We need to Vote, Elect, Engage.