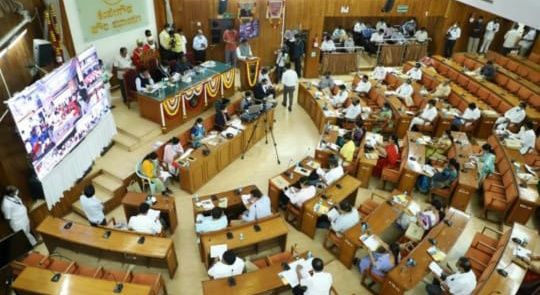 The Constitution of India has made detailed provisions for ensuring the protection of democracy in Parliament and in State Legislatures. But it did not provide adequate powers for the local self-government/ governance leading to democracy not being stable in municipal governance.

74th Amendment of the Constitution

Local Government, that is to say, the constitution and powers of municipal corporations, improvement trusts, district boards, mining settlement authorities, and other local authorities for the purpose of local self-government or village administration.

Demographics and other conditions, which are determining factors for constituting a particular type of municipality differ a great deal from one State to another.

Bangalore became a corporation in 1949 and the rest of the cities of Karnataka were municipalities.
Bangalore City Corporation Act

[1949-1976] was the legislation governing the city.
Karnataka Municipalities Act [KMC] was introduced in 1976 expanded the mandate to all other cities in the state.
Bangalore Mahanagara Palike (BMP) had 3 zones and 100 wards, 15 MLA constituencies

Now, Bruhat Bangalore Mahanagara Palike (BBMP) area is an amalgamation of 7 CMCs, 1 TMC surrounding the erstwhile Bangalore Mahanagara Palike (BMP) and 110 intervening villages. The geographical area of the BBMP with all the newly added areas is 709.53 Sq.Km.
The composition of BMP and other constituent bodies of BBMP in terms of wards and population as per the 2001 Census.

Mayor is elected for a period of one year. Main functions – preside over every meeting of the Corporation, general powers of inspection, and may give direction to the Commissioner with regard to the implementation of any resolution of the Corporation.

Standing Committees for the Bruhat Bangalore Mahanagara Palike has specific functions to perform as mandated by the KMC Act:-

Each of the above standing committees has a set of mandates and link has more details.

Overview of Administrative Setup in BBMP

The Government appoints suitable state civil service officers for the posts of:

All these officers shall be reporting to the Commissioner, BBMP

There is One Ward Committee per Ward.

The composition of Ward Committees

10 members to be nominated by the Corporation (at least 2 SC/ST, 3 women, 2 from registered associations).
Officer of an appropriate rank designated as Secretary/Convener to provide all administrative assistance

Functions and duties of Ward

Rule 3 – Ward committee shall recommend to the corporation for disciplinary action on those officers who fail to carry out resolutions of the Ward Committee.
Rule 5 – If chairman fails to call a meeting in a month, one-third of the ward committee members can requisition the chairman in writing to convene a meeting calling attention to the fact that a monthly meeting is due or specifying the purpose for which a meeting is necessary
Rule 8 – Establishment of a Disaster Management Cell at ward level

KMC Act Section 166 – Every year there will be a budget prepared by the commissioner.
Estimates and expenditure, income prepared by the commissioner, provision to be done by January 15th, and submitted to the standing committee. This document is presented before the Tax and Finance Standing Committee.
Standing Committee during the review they call the various bureaucrats and officers and other standing committees for the clarifications.

The cash balance should not be less than 1,00,000, according to the Act, it cannot show a deficit.
The copies of the standing committee report will go to all 198 councilors for them to prepare.
Usually, by 1st week of February, Standing Committee Chairman will present before the council and debate, deliberate on the estimates, incomes, etc
The corporation can send it back to the standing committee for amendments if any within an estimated time.

As the area and population of the BBMP limits are increasing, administrative issues have increased and unmanageable for a single Corporation.  To make the BBMP more manageable, a restructuring committee has recommended “The Greater Bengaluru Governance Draft Bill”.

Salient points of the bill: [Source]