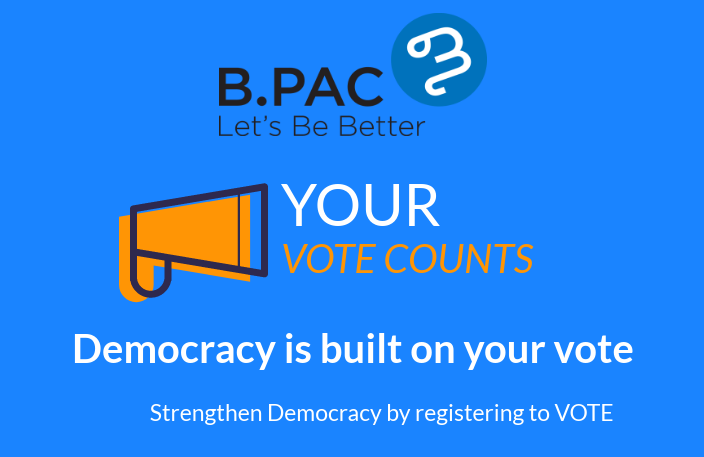 “To safeguard democracy, the people must have a keen sense of independence, self-respect, and their oneness” – Mahatma Gandhi.

We as citizens often forget our power, provided through the Constitution, by the founders of our Republic, to be able to get good, efficient and learned people to represent us in the highest levels of governments.

Article 326 of the Indian Constitution guarantees its citizens, adult suffrage. Any citizen who is no less than 18 years of age can exercise their right to elect representatives to the elected bodies to run the government at various levels such as the Parliament, Legislative Assemblies, Municipal Corporations and the like. Yet, we end up wondering and worrying about the state of affairs in our Cities, States, and Country.

We need to reclaim this right to select and elect the right, capable candidates to represent and protect our interests.

Safeguarding this right can be achieved when you get yourself to vote. The first step in doing so is to ensure each of us who are above the 18 years of age, register as a voter. We cannot exercise our right unless each one of us is a registered voter. The process of registration involves taking few steps from our side, and these are not very daunting either. We need to be understood that this effort of ours is a fundamental responsibility as we can directly influence, through the exercise of a vote, the impact of governance on our lives during the next five years. In the process, we ensure that we are the enablers of our democracy and not victims as we often think today.

As a second step, as citizens, we should take get to know the candidates who are contesting elections in our respective constituencies and try to understand their competencies to represent us. Regardless of our political alignments and preferences, we should rise above them and vote the right candidate.

India is a young democracy; we have traveled a significant distance since independence attending to the fundamental problems arising out of long stretches of foreign rule. It is time now to shift gears and change the way we are governed. Over 41 % of the Bangalore city population fall in the age bracket of 25- 44 and nearly 15% will be first-time voters. Democracy works best when it is hands-on and driven by volition. The time has come for the youth of the city to ACT and ACT NOW. For this to happen, we should register as voters and encourage many others to do so.

Our Constitution starts with ‘WE, THE PEOPLE.’ This country is ours, the government is ours and through us. For this to be a reality, we need to VOTE. So, let us REGISTER AND VOTE.