Embracing democracy and its imperfections 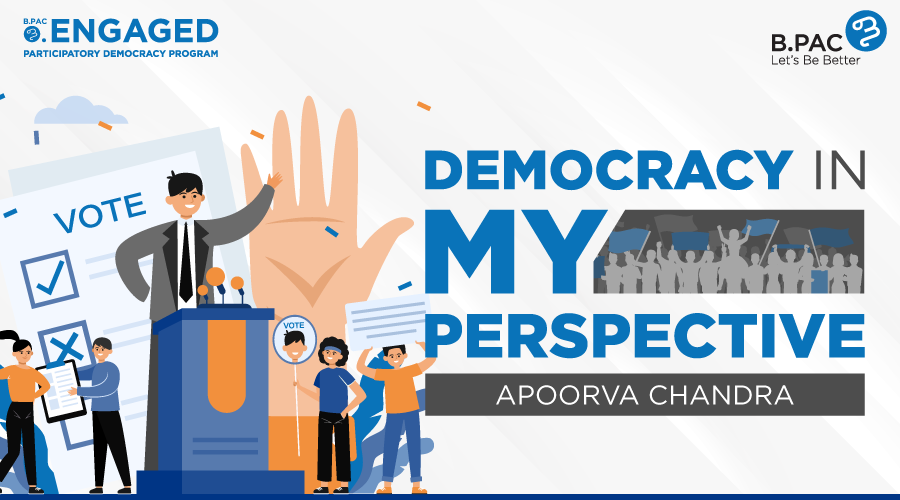 Democracy is far from perfect. But I believe that fair value judgments of any system of government can only be made when it is accepted that there is no such thing as a perfect system.

With this as the starting point, it is my opinion that it is only in a democracy that we can even hope to achieve perfection. Democracy gives to the people what all other forms of governments fail to give – the freedom to make it work.

The word ‘democracy’ is derived from two Greek words – ‘demos’ meaning ‘the people’ and ‘kratos’ meaning ‘power’. Therefore, democracy literally means “rule by the people”. It places the people at the center of all activities and processes in the State. The relationship between the governor and the governed in a democracy is such that the people are simultaneous, the source of power and the subject of its exercise.

In his Gettysburg address, Abraham Lincoln famously described democracy as “government of the people, by the people and for the people.” The merits of democracy can then be evaluated in this light.

The goal of every government should be to work in the service of its people. But in a democracy, this is more so the prescribed role of the government. After all, it is voted to power by the people in the hope that their interests get fulfilled through it. How a political party/candidate intends to help the people in this goal, is expressed in the form of policy initiatives in the election manifesto. So, democracy provides the voters with alternatives to choose from and in the process, gives them the freedom to determine the best course of action for themselves. The onus then shifts to the government of popular choice to convert the policy initiatives into actionable outcomes. In doing so, the elected representatives must act, not as representatives of their respective parties but as representatives of the people.

Since, in this system, legitimacy to govern is derived from the consent of the people, the government may be challenged when it oversteps its constitutionally specified limits. In fact, in India, the Constitution recognizes the will of the People as sovereign and not the Parliament (Legislature) or the government (Executive). The Indian Constitution as “The People of India give unto Ourselves” clearly defines the powers of the government and lays down the necessary checks and balances to disincentivize arbitrary and illegal actions.

Ronald Reagan, in one of his speeches, quipped that “the nine most terrifying words in the English language are, “I’m from the government and I’m here to help.”

Every government likes to claim that it is working “for the people” and more often than not this claim is viewed with a good amount of skepticism. While such claims are made even in a democracy, the nature of the system itself is such that public interest reigns supreme and cannot be ignored.

Moreover, the feedback mechanism in a democratic political process allows for unmet demands to be fed back into the system at regular intervals (elections). The healthy fear of being voted out of power if interests continue to remain unfulfilled keeps the government on its toes thereby, leaving little room for complacency.

Governance in democracy thrives when there is the participation of citizens – be it direct or indirect. The government has to engage with its citizens to know the pulse of society. Indirect methods of participation are through pressure groups, the media, and civil society. Although direct democracy has become a rarity, it has been adopted in certain smaller countries. But in India, even with its large population and territory, the direct participation of the people is facilitated through the system of local governments. This not only provides for administrative convenience but also incentivizes participation for the people. A positive outcome of this is that there is lesser apathy among citizens now. This Indian variant of direct democracy makes the government itself more accessible to the people given that an elected representative at the local level represents a smaller and more specific portion of the population. In turn, this makes it easier to push the government to be more responsive to the needs of its Citizens.

Therefore, democracy has been the most natural choice of political organization for most modern societies. And India is no exception. In fact, if anything, it was an obvious choice considering our inherent diversity and acceptance of not one, but many ways of life. So, it is not surprising that the essence of democratic decision-making has always been deeply embedded in the Indian psyche – going all the way back to the times of Rig Veda and Atharva Veda which introduced the concepts of Sabhas and Samitis. The importance of collective decision-making was not lost on ancient Indian societies.

Today, as a modern society, India continues to embrace democracy with all its imperfections. What makes it so sought-after for India and the world is that it is a work in progress, making it attractive for the demos.

About the Author: Apoorva Chandra