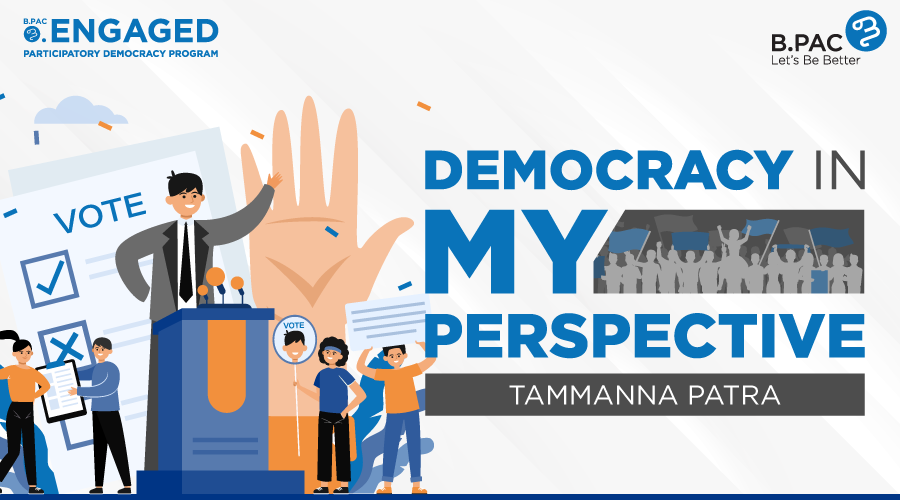 The word democracy comes from the combination of 2 Greek words ‘Demos’ meaning people ‘Kratos’ meaning power or rule. It first came into existence in the Greek capital, Athens, where they followed a direct form of government. The simple idea of democracy is the rule of the people or where the people of the country have all the right to choose and elect their representatives to form a government. There exist several types of democracies, but 2 main types are direct or pure and representative.

In a direct democracy, the people get to decide everything and not the representatives, for ex- Switzerland.

The people of a democracy get to choose their representatives through a process of voting. Wherein the candidates and parties with majority votes get to represent the people. But often,democracy is perceived to be all about voting. Voting is just a part. Democracy is about everything that protects the best interests of the people, without  discriminating on the grounds of race, religion, gender, political ideology, or beliefs. The interests of people range from healthcare, infrastructure, education, human rights, wellbeing, and so on.. Which sums up the most important feature of a democratic society, that is treating everyone fairly. To ensure this fair treatment, there must be the presence of social justice, freedom or liberty, equality and fraternity or brotherhood.

The power of a democracy is divided among 3 main organs. The legislature that forms the new laws, the executive that executes the law, the judiciary that checks these laws on the grounds of legality and makes sure nothing violates order and justice. All  three organs have independent powers and ensure no one exceeds their authority. The elected representatives in the democratic government must be able to reflect the desires, values, and feelings of the people it governs also known as the ‘general will’ (concept given by Swiss Philosopher Jean-Jacques Rousseau).

Most of the time during the voting process in a democracy, the majority of people have a greater advantage than the minorities or people belonging to the marginalised society. In a way, the elected govt must ensure equality in terms of rights, resources and opportunities and remove any social exclusions. Here the laws set up to come to the rescue of the weaker section when the majority decides to divide and discriminate. If the above is not to be seen anywhere in a democratic nation, the govt elected is hardcore majoritarian and runs its  agendas by protecting the big.  The influential then at any cost it cannot be considered as a functioning democracy.

“Democracy is the worst form of government except for all those other forms that have been tried from time to time.” In the end, this quote by Winston Churchill explains the faith of all people in democracies around the world. A democratic nation can overcome its prejudices only when its important institutions and organs like the media, the judiciary etc. do not feel oppressed to raise the right questions, are brave to have a spine of their own and have not given in to the exploitation. Nevertheless, there shall always be hope for change. There shall always be scope for better practices.

About the Author: Tammanna Patra