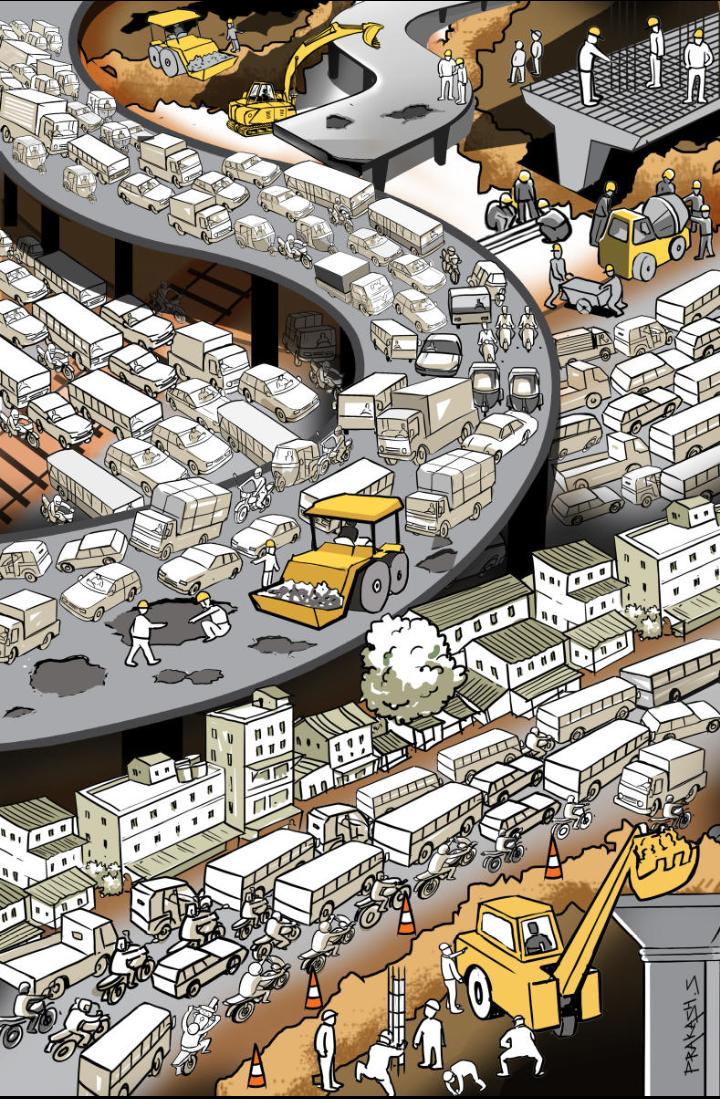 Driving on the streets of Bengaluru requires a particular set of skills – and a key skill seems to be how to survive in an environment that does not seem to have any rules! The extreme congestion during peak hours and all day congestion in certain sections of the roads can be categorised under the “3 Es”: Engineering, Education & Enforcement.

Looking first at Engineering, there is a section of roadway design that deals exclusively with the design of urban roads. Geometric Design deals with the engineering design of the cross section of the roads and especially the design of junctions. Junctions are considered critical points in a road network, because this is where vehicles change direction and are in potential conflict with other vehicles, and therefore there is the risk of accidents here.  These sections require special attention through design to ensure the safety of the road user, while also ensuring maximum flow of traffic through the junction. The junction actually defines the capacity of the road – the greater the traffic that can be cleared through the junction, the less the congestion in the roads behind it. The design of the junction is intended to ensure the safety of all road users including pedestrians & local residents, while logically guiding vehicles onto other roads in the direction they wish to go.

Yet- junctions are wide open zones of conflict, and almost all roads have widely fluctuating carriageway widths, with roads unreasonably bottlenecking down to 2 lanes from 4, or flaring out into wide open spaces that are undefined with regard to lanes. Almost none of the roads are designed with proper cross sectional components, with even basic camber missing. The lack of longitudinal design causes serious congestion and loss of capacity along the length of the roads, as vehicles fight – and that term is used literally – to get ahead of each other, weaving wildly from the extreme left to the extreme right, sticking their snouts into every which lane in an attempt to get a couple of feet ahead, completely ignoring even basic rules of civility. Lane discipline is an unknown concept here. Speeds of vehicles vary from a long & tedious crawl at the bottlenecks to a sudden burst of speed at the flared sections, and then go abruptly down to a crawl again. And as we all know, such sharp and rapid speed changes in extremely short lengths result in greater emissions of pollutants.

Intersections are left completely open with no benefit of channelisers to guide traffic, and consequently vehicles move at their pleasure through these zones of conflict. There is a total absence of channelisers even at high volume intersections. Consequently, we have vehicles in the left extreme of the carriageway turning right, cutting across the left and straight streams in order to negotiate a right turn. Buses also do the same, effectively holding up all the streams while making their ponderous turns. With a complete lack of discipline, vehicles move straight from the right and left lanes, turn left from the right lanes, and everyone actually goes any which way they please, just as long as they are through the junction.

This results in a rather Brownian movement of vehicles through the junction, and sadly, only about 20- 30% of the actual discharge capacity of the junction is utilised, as most vehicles lose the green phase due to this. I have waited for up to 8 signal cycles in order to clear an intersection – and this wasn’t during peak time.

Channelisers not only help improve performance of intersections, they pre-empt lane indiscipline by the very nature of their design. It is also easier to catch violators in a well- designed intersection.

A large number of grade separators or flyovers have been constructed in an attempt to relieve congestion, but rather than stream-lining the traffic, they seem to aggravate it. Careful observation will show that some of the worst congestion is at the gores (section at which the road rises up) of the flyovers. Proper design would have enforced a quantum of lane discipline on the traffic –and thereby better speeds.

All along the outer ring road, heavy, split, elevated structures have been constructed, with two streams being elevated, and at-grade roads constructed both at the centre, between the elevated structures as well as on the outer sides. However, most of these central roads have been blocked off and many have grown weeds from disuse.  The junctions beneath the flyovers are a complete free-for-all, and peak hour congestion at these points can cause hours of delays. Flyovers are generally designed to remove the heaviest flows out of the traffic onto an elevated structure, thereby relieving the traffic at-grade. However, lack of design and controls at-grade ensures continued delays here.

Blocking right -turns inherently imposes a U-turn on the traffic elsewhere. The one ways & no- right turns have been imposed on buses as well, and when these huge vehicles make a U-turn at a gap in the median, they are forced to keep to the extreme left of the carriageway because of inadequate turning radius available to them. This effectively blocks both streams, leading to queue build-up behind the buses. And as this turn is being negotiated not far from an intersection, it blocks the movement of traffic at the intersection also. Design interventions can allow for buses to be exempt from such restrictions.

The number of vehicles discharged at junctions is thus only a fraction of its potential capacity. Should the intersection be designed with proper channelisers & lane discipline enforced, the capacities can be substantially increased, and any augmentation of infrastructure in the nature of more grade separators may possibly be deferred or even avoided.

The one way system and flyovers have been implemented in order to relieve congestion – but I firmly believe that if we clean up the way the existing streets & junctions have been laid out & are being used, a lot of wasteful miles travelled by the citizens can be reduced, streets can be made 2 –ways again, and neighbourhoods restored to their rightful owners.

About the Author: Bina C Balakrishnan

Good Governance is an approach to the government that is committed to creating a system founded in justice and peace that protects an individual’s human rights and civil liberties. In  International Development, Good Governance is a way of measuring how public institutions conduct public affairs and manage public resources in a preferred way. Governance is the process of decision-making and […]