An insight into the Bruhat Bengaluru Mahanagara Palike “In this structure composed of innumerable villages, there will be ever widening, never ascending, circles. Life will not be a pyramid with the apex sustained by the bottom. But, it will be an oceanic circle, whose centre will be the individual, always ready to perish for the village, the latter ready to perish for the circle of the villages, till at last the whole becomes one life composed of individuals, never aggressive in their arrogance, but ever humble, sharing the majesty of the oceanic circle of which they are integrated units. Therefore, the outermost circumference will not wield power to crush the inner circle, but will give strength to all within and will derive its own strength from it.” Mahatma Gandhi

Our constitution has prescribed three main arms to ensure we, as a Nation are served efficiently. Legislature, Executive and Judiciary are these three primary arms that help in smooth functioning of the governments and accordance with our Constitutionally sanctioned Democratic norms. Given our vastness and diversity, the Constitution has also provided for a decentralized rule with the divestment of powers to various regions and levels.

One of the critical reforms to empower the lowest rungs of the governments was through the 73rd and 74th Amendment to the Indian constitution. It was meant to provide democratic governance at a third level, after the Centre and the State, the grassroots level, namely, Municipality and Gram panchayats. This devolution of power will ensure that the aspirations of the citizens at the local level are met through self-rule.

The Karnataka Municipalities Act, 1964 was enacted by the Karnataka State government to enable the local governance system. Accordingly, any city with over a million population would be governed by a Mahanagar Palika, which is an elected body with a term of five years. This institution has powers, as provided under the relevant legislation, to raise resources through taxation for providing services such as health, education, infrastructure, etc. and frame rules for governance.

The Municipal Council, comprising of elected representatives, meet and interact to run the City and meeting the needs of citizens. It is supported, by the administrative arm of bureaucracy. Standing Committees are small groups of elected representatives formed under the Council with the mandate to attend to specific areas of governance of the City. BBMP governs our City of Bengaluru. It has a council of 192 corporators, representing various geographical areas of the city, called Wards.

With an objective to strengthen the governance and administration at the city municipal level, B.PAC initiated a  Civic Leadership Incubator Program

[B.CLIP] to create impact through leaders engaging from ward level. Prospective leaders at the ward level are taken through a structured course of classroom sessions and ground level projects to enable participants understand the City’s historical moorings, its finances & administration, political systems, rules & regulations, etc. to get a deeper understanding of the role the local leaders can play in shaping the lives of people in Bengaluru. Five such B.CLIP programmes have been conducted so far since its inception in 2014, and currently, over 200 passionate Civic leaders have been trained and are distributed across the city.

B.PAC has been strengthened through B.CLIP leaders and now have a very effective and motivated team of leaders to run many of the programmes designed to improve their respective neighborhoods. These efforts consolidate our efforts to have a city level impact. As a part of the program, to facilitate a better understanding the functions of BBMP the participants attended BBMP Council meeting on November 28th. During this visit, B.CLIP participants got a first-hand experience of the council meeting and opportunity to witness the business proceedings of the Council.

This visit was made possible through the kind courtesy of  Worshipful Mayor and BBMP Council officials.  The Mayor, Deputy Mayor and Commissioner headed the council meeting to conduct business proceedings.

The council meeting had one elected member raise questions on issues that his ward’s constituents have been facing and needed resolution. This was a clear demonstration of the purpose of devolution of power to the third tier in action! The Corporators sought a response from the Municipal Commissioner through the Mayor, a way to keep the arms of the government in check and hold accountable. Officers of various departments of BBMP were present during the council meetings as they are required to answer questions raised about their agencies.

In the council meeting that we attended, significant issues such as water, public safety issues, problems caused by the information asymmetry between various departments were discussed. 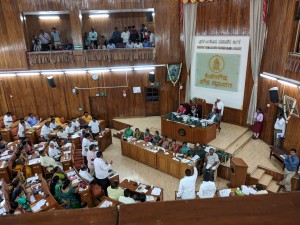 It was an excellent experience for the B.CLIP participants to see for themselves the council process on various issues as presented by the ruling party and the objections raised by the opposition concerning specific points. The deliberations on multiple matters made us get a first-hand sense of the way business is conducted by an elected body, representing people. 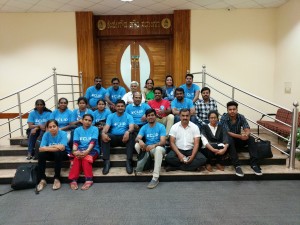 As citizens, we need to ensure we actively participate in our democratic processes where ever there is an opportunity, engage with our local elected representatives to push them to take up the issues faced in the right forums. Every arm of the government should be held accountable for their actions and deliver the services meant for citizens efficiently.The processes observed during the visit gives the participants confidence that citizens’ engagement is both necessary and the key to improve our governance structure.