A Dive Into Bengaluruâ€™s Lakes 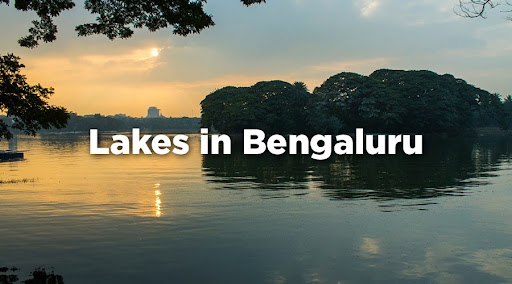 What comes to your mind when you think of lakes? A body of water thriving with life and visitors, both humans and birds alike or a place that evokes nostalgia? How many lakes do you know about in the city or area where you live?

Lakes and their importance:

The word â€˜lakeâ€™ originated from the Latin word â€˜lacusâ€™ and is a large body of water within a body of land. Lakes do not flow like rivers but have many rivers flowing into them.

Lakes not just offer environmental benefits but also influence the quality of life and strengthen the economy. Lakes can ease the impact of floods and droughts by storing and releasing large amounts of water.

Lakes also play a significant role in replenishing groundwater, ensuring a perennial water supply to the surrounding areas. Over time, lakes have evolved to become a hub of recreation, life, and activity rather than a mere water body. Today, many lakes across the world are a site where flora and fauna flourish! India is home to many picturesque lakes, and Bengaluru itself is not far behind! The city is home to many lakes and at one point had nearly 1000 lakes!

Most of Bengaluruâ€™s lakes are irrigation tanks that were built many centuries ago. In the 16th century, Kempe Gowda built tanks and irrigation wells that were interlinked through a cascade system, ensuring no water was wasted. Kempe Gowdaâ€™s vision of building a city from scratch brought Bengaluru to life. He had a vision of creating a perennial supply of water in the city. Many tanks were built, and numerous canals were introduced to connect them, leading to some pristine lakes in Bengaluru.

Many rulers and kingdoms like Marathas, Hoysalas, Wodeyars have all been patrons of lakes and tanks. While the rulers ensured that the tanks were maintained, community and village elders decided on water usage. There were people who distributed water to a village or community tank. It was the community that played an active role in maintaining and cleaning the water bodies. At the same time, farmers and fishermen used the lakes for economic purposes. Slowly, lakes even evolved into a religious and cultural hub, with people celebrating festivities around it. By developing into a centre for religious activities, lakes also offered ecological benefits as idols made out of silt and clay would be immersed in the lakes and tanks. This immersion would help desilt tanks and move silt from smaller to larger ones. According to theÂ Environment and Society Portal, Bengaluru had an abundance of lakes in 1885, which aided in agriculture. The increasing population led to encroachment, bringing down the number of lakes in the city to a minimum by 2014.

Kere (à²•à³†à²°à³†) stands for â€˜lakeâ€™ in Kannada. Bengaluru does not have a perennial river running nearby, and the water dependency lies on River Cauvery, which is also very far. Keres in Bengaluru are an integral part of the culture, economy and history. Wetlands like kere are productive and nurture biodiverse ecosystems within themselves.

In the 1960s, the number of tanks and lakes in Bengaluru was around 920. The numbers reduced to less than 580 in 1993. Till almost 1895, many lakes in Bengaluru were a source of unfiltered water. According to aÂ reportÂ by Environmental Management and Policy Research Institute, 57.5% ofÂ gokattesÂ and 75% ofÂ kuntesÂ of Bengaluru have disappeared. The map dating back to the 1930s indicates the boundaries of the city (shown in thick orange and yellow lines). The orange represents the Cantonment part of Bengaluru, and yellow, the civilian part. The map also indicates numerous lakes in the city.

Some of the surviving lakes in the city are:

According to theÂ Institute of Social and Economic Change, rapid urbanization in Bengaluru has resulted in housing colonies being expanded in an unplanned manner, causing severe damage to the environment. 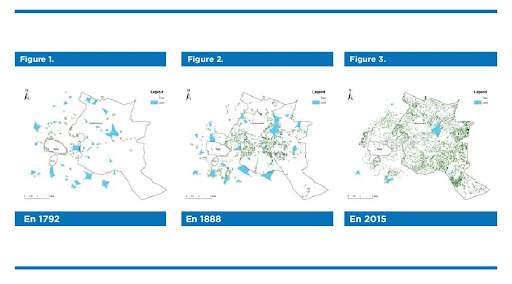 Most of the lakes in Bengaluru have vanished due to encroachment and construction activity for urban infrastructure expansion. The city, which once had 280-285 lakes, has:

This is the current situation of some of the lakes and tanks in Bengaluru: 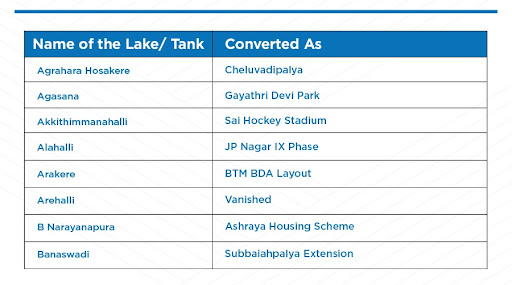 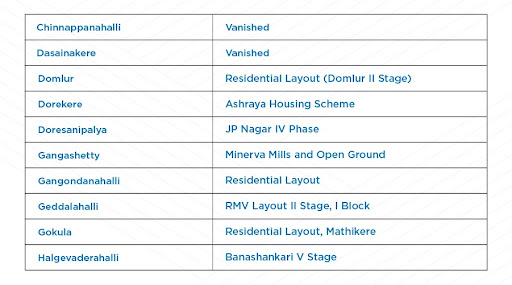 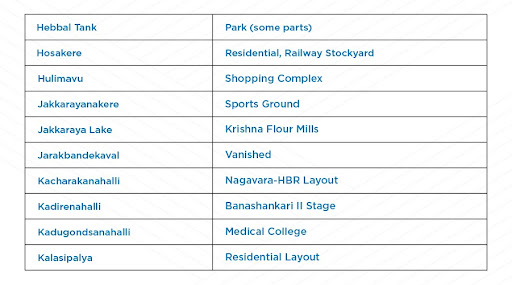 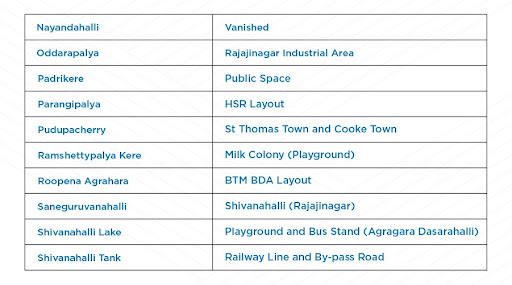 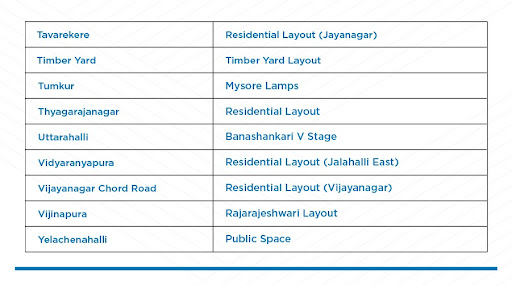 The Indian Institute of Science’s report also finds that of the 360 recognized slums in Bengaluru, 30% have underground sewage systems, while a majority of them have wastewater discharged through stormwater drains that end up in lakes. Even wastewater from apartments gets discharged into the lakes.

Indiscriminate drilling of borewells is believed to be another cause leading to the disappearance of lakes. Bengaluru has more than 1,25,000 borewells, and the water level in the city has plunged below 400 feet.

The lakes in Bengaluru nurture a wide variety of flora and fauna. With encroachments happening at a rapid scale, there is an imbalance created in the lakes and ecosystem, ultimately harming the city’s population.

Agencies working towards Saving the Lakes:

Saving the lakes is of utmost importance in today’s scenario. Here are some agencies working towards the betterment of lakes in Bengaluru:

Effective and sustained involvement of all agencies can make a massive difference in the revival of lakes in Bengaluru. Working together can help restore the lakes to their original state and ensure a better ecosystem!