Bangalore Political Action Committee (B.PAC) is a non-partisan citizen’s group that aims to improve governance in Bengaluru and to enhance the quality of life of every Bengalurean. B.PAC is specifically targeting good governance practices, integrity and transparency in all arms of the government, improving the quality of infrastructure in the city, identification and support of strong candidates for public office at all levels of governance and the creation of a safer city where the rule of law is ensured for all citizens of Bengaluru as highlighted in B.PAC charter and agenda for Bengaluru.

Born of a will to convert urban apathy to positive actionable change, B.PAC has grown into an influential, neutral, apolitical organization that works towards enabling good governance and encouraging active engagement with citizens, civic bodies and the government. B.PAC has emerged as a platform for participative democracy, inspiring informed voting by advocating for a transparent campaign financing, responsible electioneering, organizing pre-election debates and preparing reports of the candidates contesting in elections.

The Bangalore Political Action Committee has been established to improve the quality of life in the city. Its objectives are as follows:

Our strategy to achieve these objectives will be via concerted strategic interventions. Given that our democracy operates within the framework of a constitution carried out by the law and public administration, our interventions will focus on these. We work on:

Guided by the aim to make Bengaluru a world-class metropolis, the organization works on the training aspiring civic leaders, promoting participatory democracy, women and child safety, environment protection, mobility solutions, heritage protection and advocacy for smarter and effective regulations. The following are the list of programs/initiatives B.PAC conducts to achieve its mission and vision. 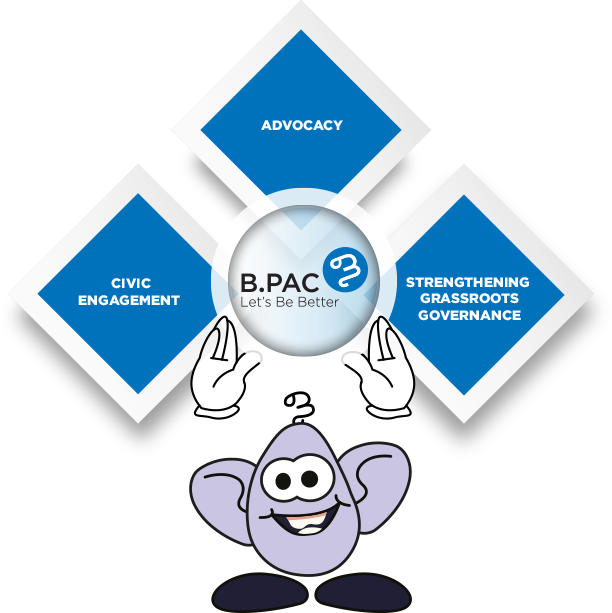 The Agenda for Bengaluru is a set of initiatives across the spectrum of government and society, which B.PAC believes will enhance the quality of life for all citizens in Bengaluru. As the objectives are reached, or reviewed from time to time, B.PAC may include new initiatives that reﬂect the changing needs of the city.

(a) Proper governance structure for the city

The policy, planning and administrative efforts of the government are intertwined, as a result of which there is inadequate clarity of roles and responsibilities of the BBMP, state government and Parliament for the city. Reforms and policies that would have greatly improved the quality of life in the city are mandated by the 74th Amendment, the Karnataka Municipal Corporations Act, and the BBMP Act, but are not being fully implemented.

Therefore, the focus of B.PAC is:-

1. SEPARATION OF PLANNING AND ADMINISTRATION

Create a statutory planning approach for all aspects of economic and social development, through the formation of a regional planning authority for Bengaluru city.

Establish a meaningful term of office for the Mayor of the city, the Corporation Commissioner and key civic officials, such that they have adequate time to develop a vision for the city and implement it. Also to ensure that the mandates of the 74th Amendment and the recommendations of the Dr. K. Kasturirangan Committee are implemented.

4. CITY GOVERNMENT AS AN IMPORTANT THIRD TIER OF GOVERNMENT

Pushing for key officials in the BBMP (and the parastatals, e.g. BWSSB, BMRTC, BESCOM) to be appointed in time so that there is adequate leadership to meet the city’s needs for development. All parastatals that provide civic services should be brought under a common authority for the city to ensure that BBMP has the capacity to administrate the areas of the city. A municipal cadre should be established for the state, and officials in city government appointed from this cadre only.

Appoint technical members in the boards of the civic agencies and technical advisory groups in each agency that bring in the expertise of private citizens to the regular functioning of service providers.

(b) Promoting citizen inclusion in governance

The city is growing every day, and the scale of the problems we face is also increasing. Also, there is a growing disconnect between citizens and governance. To address these deﬁcits, B.PAC will push for formal inclusion of citizens in public decision-making and in solving problems at the neighbourhood levels.

This can be done by:

Bengaluru faces a serious shortage of finances to maintain infrastructure, support economic activity and sustain public services. Given the importance of the city to the economy of the state, it is important that we should keep this ‘engine’ of the state running smoothly. Several proposals for increasing revenue are needed. For instance:

These funds can be given either to BBMP or BDA for infrastructure development. The principle of such use of funds can be applied in all cities in the state, and they would all benefit from the infusion of funds.

To most citizens, it is not clear what the civic agencies are doing, or how well they are doing it. It is important to set measures of success for each of the agencies, and to also have public disclosure of their work, whether in small projects or at the level of achieving an overall vision for the city.

B.PAC will work for:

1.STRENGTHENING URBAN REPRESENTATION – Despite the growing urbanisation in the country, the number of seats in state legislatures and Parliament from urban areas has not grown. Thus, we explore legal and political processes to make representations that continuously reflect changing demographic trends.

2.CAMPAIGN FINANCE – The permissible amounts of expenditure for election campaigns is currently too low, and needs to be set realistically. Also, regulation of campaign expenditure is weak. B.PAC will take up necessary interventions in courts as well as with the Election Commission to set realistic limits for expenditure and ensure that these are regulated well so that the public gets a good view of all candidates before election day.

B.PAC’s advocacy of its objectives will be greatly strengthened if large numbers of people in the city are also supportive of it. To this end, B.PAC will work to develop and maintain a public outreach program that provides a steady stream of material to the public to educate them about its objectives and the progress that remains to be made to achieve them.

(a) A network of supportive citizens, known as the Friends of B.PAC, will be formed to extend the advocacy of B.PAC into different parts of the city, and in different fora.

(b) The B.PAC website will register those who are similarly keen on reforms in the city, and send them regular updates of the work B.PAC is doing, along with suggestions on how they can be co-advocates with us in furthering the agenda for Bengaluru.

(c) B.PAC will partner with organisations engaged in similar work to promote reforms in the city and take up speciﬁc initiatives.

(d) B.PAC will maintain a media outreach program by which material for the media is speciﬁcally prepared and distributed. B.PAC members, in their personal appearances in the media, will also take up the advocacy of the agenda for Bengaluru.