B.PAC under its B.ACCOUNTABLE – Research, Regulatory and Advocacy Program submitted its strong objections to BESCOM’s proposal for an increase of electricity tariff for FY-21. Revathy Ashok, CEO, B.PAC, and Archana M V, Research Coordinator, B.PAC made the submissions before the commission today during the public hearing conducted by Karnataka Electricity Regulatory Commission (KERC).

B.PAC has been analyzing the submissions made by BESCOM for their annual tariff increase since 2014. Our analysis for FY 19 shows that BESCOM has consistently shown no improvement in any of the key metrics such as – power purchase cost, energy sales in MU, and T&D losses, collection efficiency, quality of service to citizens among others over the past 4 years and has never met the Commission-approved rates and sale levels. 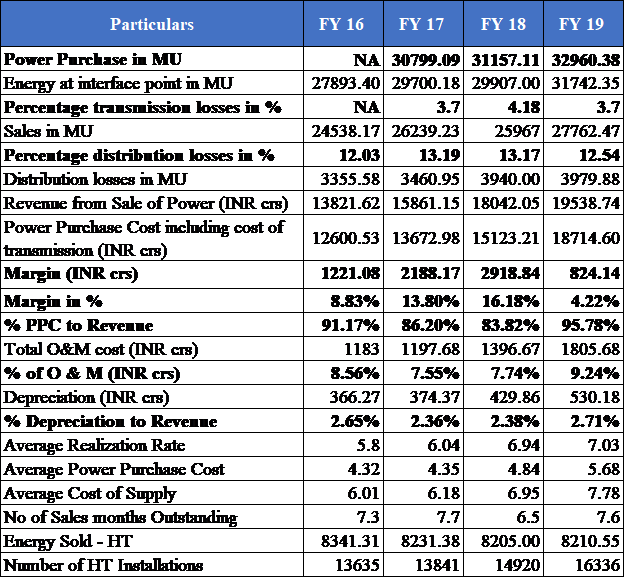 In just one year, (FY 18-FY 19) the revenue from the sale of power has increased by 8 % while the power purchase cost (PPC) has increased by 24 %. In this financial year as well, BESCOM has failed to manage the power purchase costs efficiently and has relied heavily on short and medium-term power purchases increasing the total cost by INR 3058 CRS. BESCOM should have optimized product mix with the use of the low-cost source of power to stay within Commission approved rates

Karnataka state in FY 19-20 was blessed with good monsoon rains, as a result, all the dams in the state were running at full capacity. However, in the power purchase projections for FY 21, BESCOM has understated the procurement from KPCL Hydel (an increase of 61 MU only). BESCOM should have focussed on procuring higher units of power from KPCL Hydel which is available at a competitive rate and reduced the projected power purchase from other categories for FY 21 to reduce the overall weighted average cost of PPC.

Although BESCOM largely caters to the urban segments, the energy consumed by the HT category has been decreasing YoY. At a time where Bangalore Metropolitan Region and its adjoining districts are prospering, and Karnataka’s GSDP is expected to grow at 9.6% CAGR (Economic Survey of Karnataka 2018-19), it is disheartening to see that these businesses are choosing not to procure power from the BESCOM(energy sold units are falling) because of the non-competitive rates at which BESCOM is making power available to industry

From our analysis, it can be noted that between FY 18 and FY 19, the % of industrial consumption of energy in BESCOM served areas as a proportion to Karnataka state has fallen by 6%. The industries in the region are buying power from open access. BESCOM needs to focus on providing quality power and reduce the tariff to the industries since this sector has a major scope for job creation.

The data as per the Economic Survey of Karnataka shows a disproportionate increase in the agricultural power consumption as compared to the gross irrigated crop area in hectares over the last four decades. This seems to indicate that the agricultural power is being diverted to other sources. In the name of farmers, the power is being robbed and the loss is having to be borne by the exchequer.

For FY 21, BESCOM has projected a 7 % increase in the number of IP sets from FY 19. The number of IP sets projected by BESCOM is a serious concern since as highlighted above, BESCOM largely caters to the urban requirements. Our analysis has further shown that in FY 19, 904463 IP sets have consumed 4 % more energy in MU when compared to 7888029 domestic installations. The specific consumption per domestic consumption is 877.20 units in comparison to 8107 units per IP set per annum, which seems unrealistic.

The above highlighted key reasons and our detailed submission to the Commission show that BESCOM has been consistently performing poorly and has not improved the service quality to citizens. The Commission is responsible to protect the interest of the consumers and not allow BESCOM to pass on its inefficiencies to the consumers by increasing tariffs.

Our prayers to the Commission are as follows:

After making the submission, Ms. Revathy Ashok, Hon CEO and Trustee said “B.PAC  has been presenting detailed objections to the Commission for the last 5 years in public interest after extensive research and analysis. We are distressed to note that in spite of such detailed submissions year, no serious steps have been taken by the commission to force improvement in BESCOM performance.  There is a complete lack of vision in BESCOM’s view of the future and how it plans to grow its revenues and improve its operating performance in a  sustainable and predictable  manner.”

Ms. Archana M V, Research Coordinator, B.PAC said “The Commission should direct the BESCOM to draw a five-year roadmap to determine the charges and tariff instead of setting an annual tariff.” 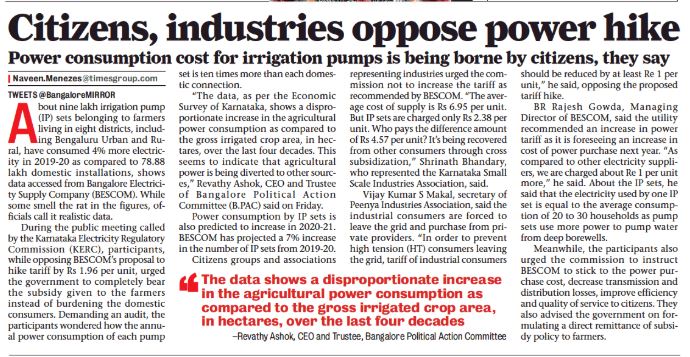