Over the last decade, there has been a phenomenal growth in the population of vehicles in Bengaluru. There are multiple regulatory challenges that prevent the new mobility service providers to offer sustainable mobility solutions in India. The Motor Vehicles Act specifies two kinds of permits fortransport operators – stage carriage and contract carriage, which has to lead to a number of issues that vary from state to state.

The regulations in the state of Karnataka have created bottlenecks for service providers in the space of ride-sourcing, ride splitting, ride-sharing, and bike, cycle, and car-sharing models.

The major regulatory bottlenecks in Bengaluru include – fare cap and no surge pricing, restrictions on shared cabs ad shared autos, no policy for carpooling and bike taxis among others.

With this background, B.PAC and Uber under its initiative on &quot; Sustainable Mobility for Bengaluru&quot; organized a roundtable discussion titled ‘Regulatory Ecosystem in Bengaluru Mobility’ on September 6th, 2019 at the B.PAC office. The discussion had representation from major stakeholders 1in the sectors mentioned above, highlighting important bottlenecks and challenges in the regulatory system in Karnataka.

The major points during the discussion can be classified under the following themes:

The roundtable discussion organized by B.PAC and UBER provided a platform for the stakeholders to put forth their points on the regulatory challenges that restrict their operations in the state of Karnataka. 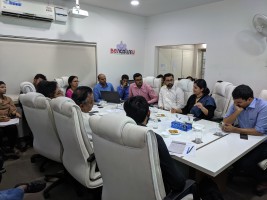 Candid shot during the Regulatory Ecosystem in Bengaluru Mobility roundtable at B.PAC office.