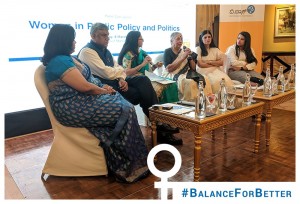 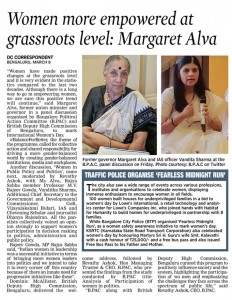 Panel Discussion on ‘Women in Public Policy and Politics’

This was followed by Revathy Ashok, Hon Managing Trustee & CEO, B.PAC presenting the findings from the study conducted by B.PAC title- Analysis of Participation of women in politics:

The recommendations from the study are as follows:

2)      Gender Report Card: The government should publish a gender report card that shows participation of women in all spheres

All the panelists collectively voiced an opinion strongly to support women’s participation in decision making in politics, administration and public policy.

“ Women have made positive changes in the grass root level and its is very evident in the statistics compared to the last two decades. Though this a a long way to go in empowering women, we are sure this positive trend will continue.” Margaret Alva, former union minister and governor

“India women in leadership was a successful initiative to bring more women leaders into politics and we intend to take it to every corner off this country because there an innate need for such progressive imitative”. Prof  Rajeev Gowda, MP Rajya Sabha

“B.PAC along with British Deputy High Commission, Bengaluru curated this program to positively influence the society and the system highlighting women participation and emphasizing the challenges faced by women across different spectrum of public life and bringing a positive change” Revathy Ashok, CEO B.PAC

This event was covered by Deccan Chronicle and International Business Times